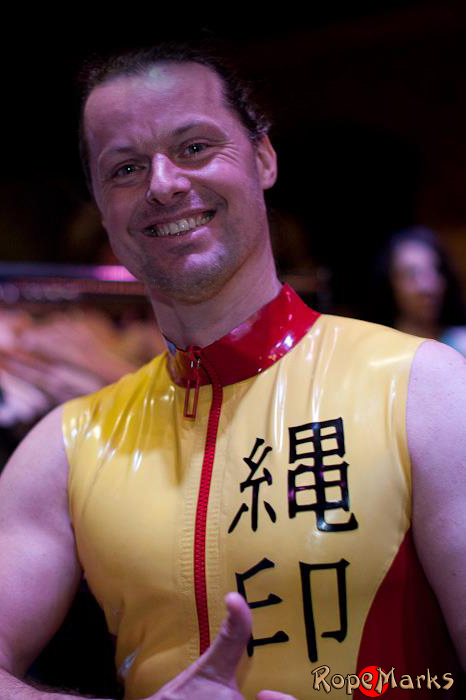 RopeMarks (Amsterdam, the Netherlands) started studying and specializing himself professionally in Japanese rope bondage (shibari, kinbaku) in 1999. Over his career he studied under the lineage of the late Akechi Denki (明智伝鬼) and Naka Akira (奈加あきら) in the land of the rising sun. RopeMarks’ work reflects the traditional techniques taught by these leading nawashi’s but is vastly complemented with his own distinct and unique style.

RopeMarks is recognised as the leading Dutch specialist in the field of Japanese rope bondage. In the world-wide kinbaku scene RopeMarks is a house-hold name of very good reputation.

RopeMarks has been teaching Japanese rope bondage around the globe, from Europe to the USA and all the way to the country of origin, Japan.

RopeMarks Ryū is one of, if not, the oldest traditional Japanese rope bondage Ryū in the Netherlands and Europe. It was officially founded in 1999 by Bob of RopeMarks.

RopeMarks Ryū is a traditional school developed by Bob of RopeMarks that is the synthesis of many aspects of the deceptive simplicity of Kinbaku and Hojojutsu. It is designed to teach you essential skills and techniques with an emphasis on technical, physical and emotional safety.

RopeMarks Ryū is designed on a number of pillars to allow its students to easily understand and learn essential Japanese rope bondage skills.

be a voice, not an echo

What tuition do we offer?

What tuition do we offer?

What others have to say

What others have to say

The testimonials is a brief list of feedback from RopeMarks Ryū students and participants.

read some of our testimonials

I’ve heard enough, I want to apply and participate. Be among the first to be notified of new tuition dates

fill out the application form